Jessica Helen Lopez has recently been named the City of Albuquerque Poet Laureate. She has also been a featured writer for 30 Poets in their 30’s by MUZZLE magazine.  Lopez is a nationally recognized award-winning slam poet, and holds the title of 2012 and 2014 Women of the World (WOW) City of ABQ Champion. 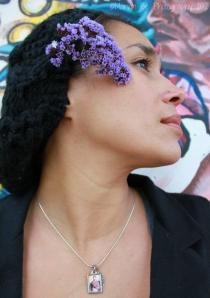 She’s also a member of the Macondo Foundation. Founded by Sandra Cisneros, it is an association of socially engaged writers united to advance creativity, foster generosity, and honor community.

Her first collection of poetry, Always Messing With Them Boys (West End Press, 2011) made the Southwest Book of the Year reading list and was also awarded the Zia Book Award presented by NM Women Press. Her more recent publication, Cunt.Bomb.(Swimming with Elephants Publications 2014), is a chapbook collection of poems focusing on the powers of the feminine. She is the founder of La Palabra – The Word is a Woman collective created for and by women and gender-identified women and a Ted Talk speaker alum.

Along with several other publications, her collection: Always Messing with Them Boys and her chapbook Cunt.Bomb. are available from Amazon.com.

Jessica Helen Lopez is the Volunteer Coordinator for the upcoming 2015 PSI event, Women of the World Poetry Slam to be hosted in Albuquerque, NM.